I Liq Chuan is unique in its approach as a Martial Arts system. Unlike a lot of traditional Chinese Martial Arts, I Liq Chuan does not disguise methods with esoteric or poetic language. Master Chin, when deciding to expand the art, created a system of concepts and principles based on the English language, using modern scientific principles in order to guide others to understand and recognize how to connect with and train the body. In short, Master Chin created a complete system that is accessible more than traditional.

The system has three parts: 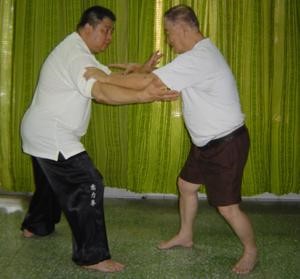 I Liq Chuan cultivates the elusive skills of listening through touch, and sharpening all of the senses. You train to be in control of your attention, and harness that ability to unlock a higher level to any type of skill. Through understanding and utilizing Zen and Tai Chi principles, students guide their attention to recognize a profound balance within their unique body structure. By allowing the body to coordinate with itself, gravity, and the conditions of the moment, you learn to optimize your natural strength for all movements. You train to use dynamic relaxation to manifest the duality of yin and yang, and maintain balance within your body’s natural limits. This reveals the power of the bones, ligaments, and tendons. As you develop your awareness to merge with the moment, you open your heart to the truth of the nature and move far beyond defeating an opponent, to instead, overcoming your own limitations.

Sometimes known as “an art for masters,” arts like I Liq Chuan were once only accessible through one-on-one instruction from a master. However, in recent years Grandmaster Sam F.S. Chin has developed a modern curriculum for students and instructors that establish guidelines from complete beginner to master instructor. Now students are allowed a rare opportunity to experience and learn this esoteric art that, formerly, was the privilege of only those close enough to learn directly from Master Chin and his Father.

I Liq Chuan is a style of Kung Fu based solely on physical sensitivity and sensorial mind awareness. You train through the process of understanding your muscular movement, body structure (skeletal, ligaments and tendons), incorporating chi (energy) and your mental process. ILC does not develop techniques for dealing with particular situations; which just create another habit. Through the learning process, (which is merely to recognize and realize, not to accumulate or imitate) the student begins to understand how “mental and physical” affect each other and starts to develop the skill to unify and coordinate them.

Awareness is consciousness allied to knowledge. It includes being attentive to what goes on both inside your self and in the external world. Awareness cannot be taught verbally. It has to be experienced. In order to be experienced a particular leaning situation needs to be created. This situation must both stimulate awareness and pose problems that only heightened awareness can solve. The training provides an opportunity to gain awareness in a safe setting.

Relaxation is an essential component of the art. Relaxation contains the process of looseness, softness, elasticity, and fa jing (issuing power). As soon as an I Liq Chuan practitioner touches an opponent’s hands or body, he can feel instantly where the opponent’s weight and center of gravity is and what strike or technique the opponent is going to use. Ultimately, the I Liq Chuan practitioner is able to sense the opponent’s intention without contact, through awareness. He can redirect the force and use it against the opponent or incorporate the use of fa jing (energy release strikes) depending on the threat level.

It is the mind that leads and the body that follows. When you are trying to move your opponent, first lead his mind before you move his body. By trying to move your opponent with brute force alone his or her body feels heavy and you have to exert a lot of energy. The mind has neither weight nor volume. If the art of leading the mind is mastered, a woman or a child can easily defeat a large powerful man. By leading your opponent’s mind, he leads his own body movement. He defeats himself.

Originally I Liq Chuan had no training forms. At first the system only contained specialized sticky hands practice, its resulting sensitivities, and Chi Kung. The system has expanded and includes two training forms. Applications are still learned from the sticky hand practice; which is based on the “inner feel.” The primary emphasis of I Liq Chuan is awareness, which develops in time through diligent practice and the understanding of the I Liq Chuan philosophy. An I Liq Chuan student is taught from form to become formless. There are no fixed moves. Every move is based on what the condition is and what move is appropriate for those conditions. You can only use your own energy appropriately and precisely when you are merging with an opponent’s energy at every moment. The art is a tool to show you who you are and what the nature is. It is not for the purpose of building the art as a system.