The art of I Liq Chuan develops the ability of redirecting and off balancing. At the higher levels of training it also contains strikes to the meridian points. The system contains some closed fist punches but primarily uses more open palms, ch’in na and grabs. Elbows, knees and shoulders are also used defensively, but most importantly controlling the opponent as soon as contact is made is always stressed.

Unlike many martial arts systems we do not concentrate on developing techniques for dealing with specific situations. Instead, we develop physical sensitivity and sensorial mental awareness so when an I Liq Chuan practitioner makes contact with any part of the opponent’s body he can feel what technique is about to be used and where the opponent’s weight and center of gravity are extending. This skill is eventually developed to sense with absence of touch through awareness. 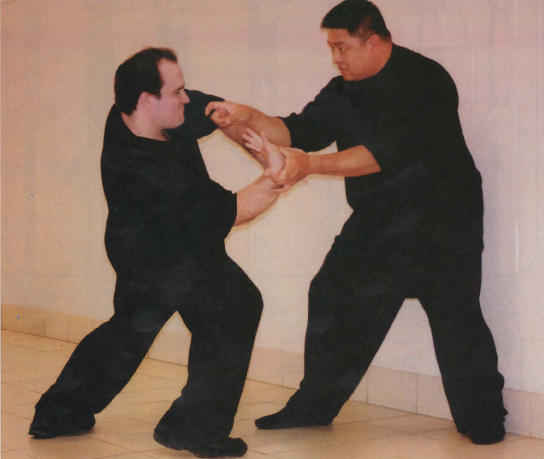 When you confront an opponent you might find it hard to move his body using strength alone, but the mind has no weight and no volume, and it leads the body. So in I Liq Chuan, we learn to lead the opponent’s mind. When this is mastered, a woman or even a small child can easily overcome a big man by leading his mind, then his own mind leads his body. With proper guidance, it normally takes about five years to acquire a high standard and maybe three years to acquire good self-defense capability, providing the students apply what they have been taught in the class and practice regularly.

By simply practicing forms, you will not attain the high level of combative skill that an I Liq Chuan practitioner can achieve. This level is attained through two-person practice. The core of the system is in its spinning and sticky hand drills. These exercises resemble Tai Chi push hands, but is somewhat different. Students train by spinning their hands and forearms around each other, while trying to focus their mind and senses, to feel their partner’s energy and also be aware of their own body and its reactions. From there various combat applications are employed. One important prerequisite to learning and applying I Liq Chuan properly and effectively is keeping the body and mind relaxed and balanced. This is developed through the understanding of philosophy, concepts, principles, and training tools. By utilizing spinning force all the body movements become rounded and circular. Power is generated from the ground through the feet and legs, then transmitted through the waist and shoulders, into a unified body movement. Higher levels maintain unity, while splitting the direction of the force at any point of the body.